H2O: Just add water (also known as H2O in Australia) is a AFI & Logie award-winning Australian television series. It first aired on Australia's Channel Ten in 2006, and later on Disney Channel, Nickelodeon and ZDF. The series currently runs on TV in over 100 countries all over the world and has an audience of more than 250 million.

Emma Gilbert (Claire Holt) - Emma enjoys horse riding, swimming and working at The Juice Net Cafe, which becomes Rikki's in Season 3. Her mermaid powers allow her to freeze anything that contains water, and later to freeze without water. In Season 3, Emma is traveling the world with her family.

Cleo Sertori (Phoebe Tonkin) - Cleo is quite shy and awkward, but a loyal friend. Her mermaid power allows her to mold water into a different shape, and later to control wind.

Rikki Chadwick (Cariba Heine) - Rikki's not very outgoing and quite a rebel, but is always there for her friends. Her special power allows her to boil water and anything with water in it; she is later able to control fire and lightning as well

Isabella "Bella" Hartley (Indiana Evans) - Bella is introduced in Season 3. She is a singer and a mermaid since the age of nine, and her power allows her to turn water into jelly and also turn water solid.

Lewis McCartney (Angus McLaren) - Lewis has known Cleo since they were 5. He is very clever, and has always helped the girls with their transformation. In Season 3, Lewis goes to America to study science.

Zane Bennett (Burgess Abernethy) - Zane's the local bad boy. Spoiled, rich, but definitely good looking, he and the girls at first disliked each other. Later, he and Rikki became a couple. After he found out about Rikki being a mermaid, they broke up, but eventually got together. When Will comes to town, Zane gets jealous of him and that leads to him and Rikki breaking up again.

Will Benjamin (Luke Mitchell) - Will is an attractive young male free-diver who falls in love with Bella. He also knows that the girls are mermaids and helps them throughout their last year of school.

Charlotte Watsford (Brittany Byrnes) - Charlotte is the girls' major enemy in Season 2. Later, she became a mermaid as well, but eventually, at the end of the series, she lost her powers forever.

Miss Chatham (Christine Amor) - Louise Chatham was one of the three original mermaids. She helped the girls during Series 1.

Miriam Kent (Annabelle Stevenson) - Miriam thought of herself as Zane's girlfriend, but, apparently to him, she wasn't. She dislikes the girls, especially Rikki, and is one of the main antagonists in Series 1.

Kim Sertori (Cleo Massey) - Kim is Cleo's annoying little sister. She has come really close to finding out about the girls' secret. Her favorite color is probably pink, since she wears it almost all the time.

Elliot Gilbert (Trent Sullivan) - Elliot is Emma's younger brother. Trough the series, he has developed crushes on Kim and Rikki. He's got a strong bond with his sister, and appears in most of the episodes.

Dr. Linda Denman (Lara Cox) - Dr. Linda Denman is a Marine Biologist who discovers entirely by her devices that the girls are mermaids and then tries to capture them in the moon pool. 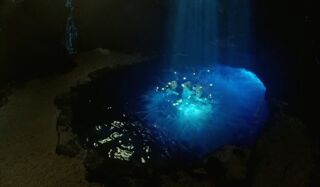