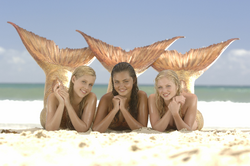 The first series revolves around Emma Gilbert, Cleo Sertori and Rikki Chadwick, who are given the power to become mermaids. They discover their amazing powers over water - Cleo can control the shape and volume of water, Emma can freeze it, and Rikki can boil it. Lewis McCartney, a friend of Cleo - and later of the three of them, helps them from being exposed. These series is mostly about Rikki, Emma and Cleo learning to use their powers and dealing with everyday problems, such as pesky siblings.

Cleo meets an old lady, Louise Chatham, who was a mermaid in her past and who warns her, Emma and Rikki from the full moon. Zane Bennett is trapped at Louise's sinking boat and Emma has to save him. Zane sees a half of her tail and looks everywhere near Mako Island for the "sea monster". Zane sees Emma as a mermaid, but he didn't recognize her because she had red hair. Rikki and Zane become a couple. At the end of the season, Zane helps Dr. Denman capture the mermaids. Zane finds out who the mermaids really are and he rescues them with Lewis' help. During the lunar eclipse, the girls lose their powers, only for twelve hours, but it was enough for Dr. Denman to lose interest in them. 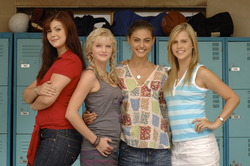 A full moon in conjunction with a rare planetary alignment calls the girls to the moon pool at Mako Island where their powers and abilities are greatly augmented and strengthened to higher power levels. The second season revolves around the arrival of a new girl, Charlotte Watsford, who moves into the area and develops an instant attraction to Lewis. After Charlotte sees a film of her grandmother Gracie Watsford as a mermaid she meets Max Hamilton who was once romantically involved with Gracie. Happy to have met his lover's granddaughter he tells her about the previous mermaids and of Mako Island. Charlotte travels to the moon pool during a full moon and becomes the fourth mermaid in possession of all the girls' powers and abilities. Believing herself superior as the one "true mermaid" she and the girls become sworn enemies. This conflict results in a confrontation, during an especially strong and powerful full moon, which ends with Charlotte being permanently stripped of her mermaid powers, abilities, and mermaid form.The girls also have romantic entanglements. Cleo breaks up with Lewis for being too clingy and protective after which he dates Charlotte. Rikki and Zane start dating again after breaking up during the series one finale. Emma meets Ash Dove and flirts with him but he is frustrated by the secrets she constantly holds back. She eventually relents and tells him that she is a mermaid. Torn because of the conflict between his friends and Charlotte Lewis comes to the conclusion that his loyalties lie with the girls and with Cleo in particular. He breaks up with Charlotte and begins dating Cleo again.

It's nearly the end of the holidays and Cleo and Rikki are about to face their last year of high school without Emma, who has gone overseas. Together with Lewis, they're confident they know everything there is to know about Mako Island. But when water attacks the girls on a full moon, they realize a new, potentially dangerous force is developing on the mysterious island, and a boy with freakish free-diving skills who stumbles upon the Moon Pool could hold the key to understanding the powerful energy...Thankfully they find an ally in Bella Hartley, a new girl in town who reveals an equally surprising twist: she too is a mermaid with extraordinary super powers. Together, the new trio face phenomenal challenges as they discover the dark secrets of Mako Island and realize their destiny as mermaids.